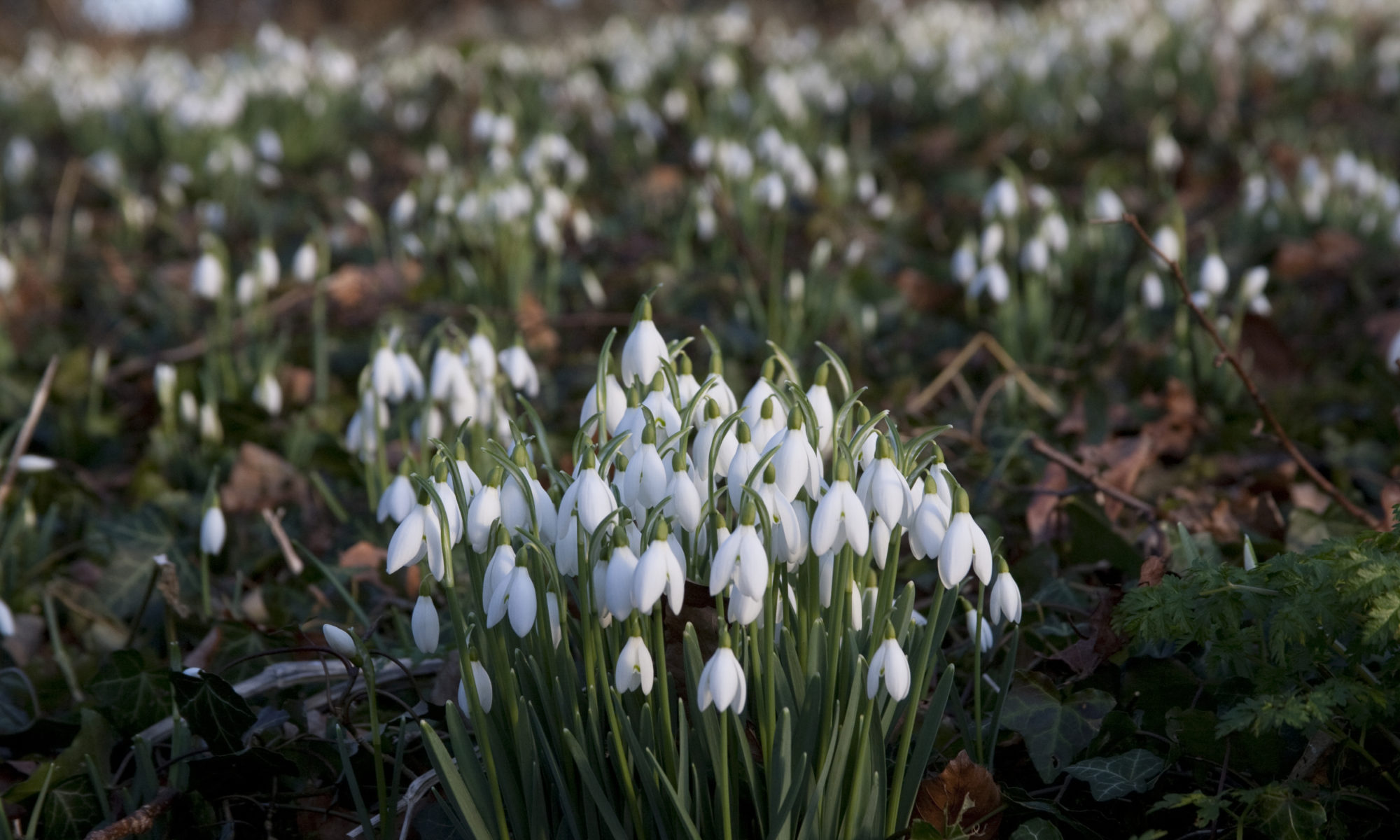 Carpets of snowdrops mingled with aconites have naturalised throughout our 18 acres of grounds and woodland, and along the banks of the River Stiffkey which runs through the Abbey Grounds.

Here in Walsingham snowdrops usually begin to come up by early January, begin to open by the end of January, are in full bloom in mid-February, and stay in bloom until early March when the flowers fade.

Snowdrops may have been brought to the British Isles by the Romans, but were first documented in English gardens much later. They began to become more common, and fashionable, in the 17th and 18th centuries. The ‘common’ snowdrop, galanthus nivalis, is not really ‘native’ although naturalised all over the UK. Like many bulbs, it can be found growing truly wild in the Caucasus, southern Europe and Turkey. They became very popular after British soldiers brought them home from the Crimean War in the 1850s.

There are plenty of ideas as to why there are so many snowdrops here in Walsingham and how they came here originally.

Conditions here are ideal for them, so it is natural for them to thrive here. Starting about 75 years ago, the Abbey owners and gardeners worked to extend the spread to the furthest reaches of the woods. In the 20th century when the railway still came all the way to Walsingham, snowdrop growing here became a cottage industry with bunches being sent down to London’s Covent Garden Flower Market by train.

We do think it possible that snowdrops could have been here since Roman times, as there was a Roman settlement. Snowdrops could also have been brought as offerings to the medieval Shrine.

The origin of snowdrops at Walsingham may be obscure: but snowdrops are commonly found growing at former abbeys and priories such as ours as well as in country churchyards. These are the first flowers of spring, reappearing when it seems still to be the depths of winter, so are symbolic of new life and rebirth and of Christian resurrection.

Snowdrops come into flower at Candlemas, 2nd February, which commemorates the ritual purification of the Virgin Mary 40 days after the birth of Christ, together with the presentation of the baby Jesus in the Temple at Jerusalem. St Luke’s Gospel says that Jesus was met by Anna and Simeon. Simeon held the baby Jesus and called him a Light to the World. Traditionally church candles were blessed on this day. Glowing white in the dark woods, folk names for snowdrops include Candlemas Bells, February Fair Maids or Mary’s Tapers.

Snowdrop enthusiasts are known as galanthophiles: to enjoy their obsession, they must be happy to kneel or even lie down in cold wet leaves to appreciate the minute variations in these exquisite little flowers.  There are a huge number of different varieties, some extremely rare.

Here at Walsingham Abbey our naturalised sheets of snowdrops are ‘common’ galanthus nivalis with some areas of the common double, galanthus nivalis ‘flore pleno’. We are developing a collection to show some of the less common types, chosen to show the snowdrop’s amazing range rather than rarity, from the huge early flowering ‘Colossus’ and chunky ‘Mighty Atom’ to the miniature ‘Tiny Tim’.

We have perfect conditions here in Walsingham for snowdrops to thrive: deciduous woodland with chalky, alkaline, humus-rich soil with good drainage, but which never dries out in summer.  The open tree canopy lets through plenty of light in late winter and early spring.